Salisbury: All You Liberals Are Crazy 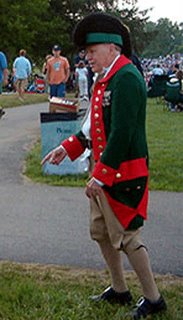 Digital Dog Meat shares some more dialogue Indianapolis Republican city-county councilor Earl Salisbury had with a friend of his on his political views. "I feel that liberalism is a sickness and mental disorder that is being used to destroy our country," Salisbury is quoted as saying.

On the HRO, he said, "How would this law help anybody. If it did it would include short people and fat people, which are able to be identified." When asked why he hasn't researched the Human Rights Ordinance, according to Digital Dog Meat he stated: "I work 85 hours per week not including 300 e-mails per day."

Quite funny stuff if it weren't so serious. Salisbury is shown at left in his Sons of the American Revolution uniform, an organization with which he is actively involved.
Posted by Gary R. Welsh at 6:50 PM

Did you read the complete quote on Marti's blog?: http://www.transadvocate.com/mt/marti/blog/archives/all_you_liberals_are_crazy.php

Is English this guy's first language? He should have stuck with the one-word replies; this stuff was written by someone who has no business whatsoever in any sort of official capacity.

I'm glad you post this stuff, Gary, it's important to get it out there, but man what a laughingstock we must be to people from outside of Indiana who comes across your blog.

As our economy continues to struggle, does anyone really wonder why our state is veiwed as a backwater cultural wasteland by the industries we are trying to lure?

Would any bright, dynamic, young professional like to be represented in government by Earl Salisbury?