Is Roberts Lying About His Membership in Federalist Society? 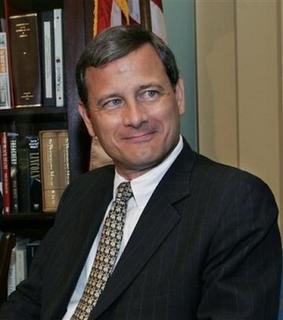 In virtually every news story written about John G. Roberts, Jr. prior to his nomination to the Supreme Court last week by President George W. Bush, a reference to his membership in the Federalist Society could be found and cited as evidence of his true bona fides as a conservative jurist in the mode of Justices Antonin Scalia and Clarence Thomas. When Bush made his announcement last week, Advance Indiana, as well as every major news organization in the country, reported that he was a member of the conservative group. But within 48 hours of the announcement came word from the White House and John Roberts that he was not a member, that he had never paid the annual $50 dues to the organization, and that he had only spoken at a few of the organization's events as had persons of all political stripes. Advance Indiana was skeptical as we reported on July 22, 2005 in a story entitled, "John Roberts: I Am Not A Federalist". And now we know why. In today's Washington Post, Charles Lane reported that "his name appears in the influential, conservative legal organization's 1997-1998 leadership directory."

Was the listing just a mistake on the part of the organization? Not if you believe today's Washington Post report: "Roberts is one of 19 steering committee members listed in the directory, which was provided to The Post by Alfred F. Ross, president of the Institute for Democracy Studies in New York, a liberal group that has published reports critical of the society." Aha, a liberal source who cannot be trusted you might wonder. Not quite. The story continued, "Federalist Society Executive Vice President Leonard A. Leo said that either he or another official of the organization recruited Roberts for the committee." According to Leo, Roberts's task was to serve "as a point of contact within the firm to let people know what is going on" with the organization. "It doesn't meet, it doesn't do a whole lot. The only thing we expect of them is to make sure people in the firm know about us," Leo said.

But Roberts insists he never paid any dues to the organization and, therefore, he cannot be a member. Just as Advance Indiana previously reported, dues are not compulsory. The Washington Report further reported that "[m]embership in the sense of paying dues was not required as a condition of inclusion in a listing of the society's leadership" according to Leo. "[Leo] declined to say whether Roberts had ever paid dues, citing a policy of keeping membership information confidential," the report said. Another member of the steering committee, M. Edward Whelan, III, told the Washington Post that "John Roberts probably realized pretty quickly he could take part in activities he wanted to" without being current on his dues. Asked about his membership in the organization this morning, Roberts declined to respond according to the Associated Press. The White House, knowing what it now knows, says it would still maintain to the public that Roberts was never a member of the Federalist Society.

As the Washington Post report story opines, echoing Advance Indiana's initial reporting on his nomination, Roberts' membership in the organization is important because it "provide[s]ome clue of his sympathies." The story adds, "Roberts has not amassed much of a public paper record that would show his judicial philosophy." Finding that public paper record just got harder after the White House announced over the weekend that papers Roberts had written while working in the White House and the Solicitor General's office in prior Republican administrations would not be disclosed to the public on the grounds that it was protected by the attorney-client privilege, even though some of those documents are already in the public domain.

Advance Indiana has also discovered more information about Roberts which sheds some light on his candor and ethics. The Swing State Project blog site questioned whether Roberts was ethically challenged. The blog site cited as evidence a brief Roberts had written in U.S v. Smithfield Foods, 965 F. Supp. 769 (E.D. Va 1997). It reports that the Court complained that Roberts brief "mischaracteriz[ed] and distort[ed] [ ] this Memorandum" and "is frustrating to the court." The story further cites the court as saying the following: "Quotes are being taken out of context, and it appears that words are being conveniently deleted or added for purposes of argument . . . A totally misleading argument presented to this court." A Westlaw search of the story by Advance Indiana did not find the quotes referenced by the Swing State Project, but we did find other troubling comments in the same vein. The case involved the giant hog producer, Smithfield Foods, who Roberts was defending in a wastewater enforcement action brought against it by the EPA. At one place the court said, "In their brief, defendants insert the word '[instead]' between 'and' and 'tap' when quoting a portion of Smithfield's letter," neither of which was in the original text of the letter according to the court. In another part of its opinion, the court said, "In their brief, defendants state that 'Smithfield was specifically exempted from the . . . deadline for ammonia and cyanide in the letter from the Board." The court interpreted the letter differently: "Clearly, the text of this letter from the Board shows that Smithfield was reminded of the deadline rather than 'specifically exempted' from it", as claimed by the defendants.

Advance Indiana has also uncovered a transcript from a January, 2003 Federalist Society luncheon address during which Michael Berger, a D.C. appellate lawyer, addressed the group in Washington and raised an interesting point about nefarious efforts by the White House and Roberts to shade his record. Berger was discussing several recent environmental cases to the group, including the Tahoe Sierra case. In discussing the latter case, Berger stated the following: "I don't know this to be a fact, but I did read about it in the Washington Post, so I give it to you for what it's worth. At the argument of this case, the Tahoe Regional Planning Agency brought in a new lawyer, somebody who hadn't been associated with the case ever, a guy named John Roberts, a supposed pillar of the conservative bar in Washington. In fact, a Bush nominee to a federal circuit court position, who was having trouble getting a hearing in front of the Senate Judiciary Committee because the liberals on the committee hated him, supposedly. Well, the Washington Post says that the administration helped Roberts get this gig representing TRPA in order to polish his environmental credentials, so he might have a better shot in front of Senator Leahy and his friends. But I guess the message is with conservative friends like that -- I don't know. Berger added, "They're not helping us, folks, and I think there's a message in there somewhere."

In the end, this all may not mean a whole lot, but it does raise serious questions about whether there is a concerted effort on the part of the administration and Roberts to misrepresent the man he truly is to the public. Because Roberts is replacing a swing justice on a divided Supreme Court, he can tip the balance on many critical issues before the Court. That makes it all the more important for the American public to learn as much as they can about how his legal thinking and ethics in the practice of law. The U.S. Senate can and must insist upon full disclosure from the White House concerning Judge Robert's past writings as a public servant. It is, afterall, a matter of public record and a matter of public importance.
Posted by Gary R. Welsh at 11:45 AM

Great job of reporting. What a phony this Roberts guy is turning out to be.

Thank you for your kind comments Marla.