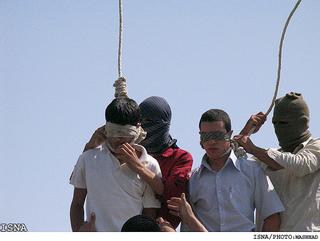 Two gay teenagers, one 18 the other a minor under the age of 18, were publicly executed in a public square in Masshad, Iran for the "crime of homosexulity" earlier this week according to the aptly named, Outrage! News Service. Iran enforces Islamic Sharia law, which dictates the death penalty for gay sex. According to the report, the teen boys admitted to having gay sex (probably under torture) but claimed in their defense that most young boys had sex with each other and that they were not aware that homosexuality was punishable by death. The victims had been held in prison for 14 months and severely beaten with 228 lashes. "Three other young gay Iranians are being hunted by the police, but they have gone into hiding and cannot be found. If caught, they will also face execution." the story reported.

Doug Ireland's blog site, Direland, reported that consensual gay sex in any form is punishable by death in the Islamic Republic of Iran. According to the website Age of Consent, which monitors such laws around the world, in Iran "Homosexuality is illegal, those charged with love-making are given a choice of four deathstyles: being hanged, stoned, halved by a sword, or dropped from the highest perch. According to Article 152, if two men not related by blood are discovered naked under one cover without good reason, both will be punished at a judge's discretion. Gay teens (Article 144) are also punished at a judge's discretion. Rubbing one's penis between the thighs without penetration (tafheed) shall be punished by 100 lashes for each offender. This act, known to the English-speaking world as "frottage" is punishable by death if the "offender" is a non-Moslem. If frottage is thrice repeated and penalty-lashes have failed to stop such repetitions, upon the fourth "offense" both men will be put to death. According to Article 156, a person who repents and confesses his gay behavior prior to his identification by four witnesses, may be pardoned. Even kissing "with lust" (Article 155) is forbidden. This bizarre law works to eliminate old Persian male-bonding customs, including common kissing and holding hands in public.

"This is just the latest barbarity by the Islamo-fascists in Iran,” said Peter Tatchell of the London-based gay human rights group OutRage!"The entire country is a gigantic prison, with Islamic rule sustained by detention without trial, torture and state-sanctioned murder."According to Iranian human rights campaigners, over 4,000 lesbians and gay men have been executed since the Ayatollahs seized power in 1979. "Altogether, an estimated 100,000 Iranians have been put to death over the last 26 years of clerical rule. The victims include women who have sex outside of marriage and political opponents of the Islamist government.

Members of the Iranian parliament expressed outraged not of the execution of the teen boys, but rather the media's reporting of their ages. According to Iran Focus News, one member of parliament was dismayed that the focus was on the age of the boys "[I]nstead of paying tribute to the action of the judiciary, the media are mentioning the age of the hanged criminals and creating a commotion that harms the interests of the state."

The events in Iran underscore the importance of maintaining a constitutional separation between church and state as we enjoy in our country. Religious fundamentalists throughout time have committed some of the worst atrocities on mankind when empowered with governmental authority.

Thank you for posting this. I testified about this practice at a hearing of a committee of the Indiana Senate some years back after an Iranian man I'd met online while working toward the Stonewall 25 events had been executed for being gay by being thrown from the top of a tall building.

The subject of the hearing was remembrance of the Holocaust. I was at the hearing for another bill and hadn't planned to testify on the Holocaust one but there had been too much head-in-the-sand introductory talk by some of the legislators present intimating that the United States was altogether a good guy where the Holocaust's victims were concerned and that weren't they all so pleased that that sort of thing was all so all but far behind us. So I gathered my courage and spoke off the cuff.

I opened my testimony with an explanation of the meaning of the pink triangle and about how the United States, after liberating the camps, forced the survivors who were incarcerated in concentration camps because they were convicted of violations against Nazi-era anti-gay laws to remain imprisoned until they had served out the entire sentences the Nazis had ordered.

Then I said that the past was also the present, telling about the death squads then targeting gay people in Brazil and Costa Rica and the enforcement of antigay Sharia laws in many predominantly Muslim countries, finishing with the story about the fate of my Iranian acquaintance and linking the mentality behind it to police abuse of gay people in the United States and, in that pre-Lawrence era, the existence of antigay laws punishing consensual sex in private in this country with sentences up to life in prison.

Asking them to think of my friend and what the last moments of his life must've been like, I could not help but think of that myself.

With tears running down my cheeks, I apologized at the end for redirecting attention from those who had suffered in the past but hoped that they'd understand that we all had a greater obligation to protect the living currently in peril.

More than a few of the Senators -- all of which subgroup had antigay voting histories -- were visibly displeased that I'd spoiled their party (and, for those whose antigay records were well known, their opportunity to enhance their reputations as humane respecters of human diversity.) The Holocaust survivors, however, noticing this dynamic, all made a point to come to me to visibly demonstrate that they appreciated my using the opportunity their suffering had earned for good cause and tell me never to hesitate to do so in the future.

Thank you again for reminding the world that "Never Again" is still a long way off.

Thanks Marla--I can only imagine the reaction of the Senators. The key to change on this issue is to constantly put the promoters of the anti-gay bigotry in this state and country on the defensive. They are shocked when the "bigot" label is placed on them and begins to have currency. Some members of the media are starting to cover stories from this perspective, but most are not.