The conspiracies swirling the death of Justice Antonin Scalia are now going to go nuclear with a bombshell revelation by the Washington Post that the late justice was attending a gathering of a very elite secret society at the Cibolo Creek Ranch in Presidio County, Texas when he supposedly died in his sleep. It's called the International Order of St. Hubertus, an order of elite hunters originally founded in 1695 by Count Franz Anton von Sporck in the former Kingdom of Bohemia, which was then part of the Habsburg Empire and current day Czech Republic.

John Poindexter, the Texas billionaire who owns the 30,000-acre Cibolo Creek Ranch holds one of the highest ranks in this international secretive hunting society of the rich and powerful and was hosting a select group of its members at his ranch when Justice Scalia was allegedly found dead in the presidential suite where he was staying during the weekend hunting trip. The Post also reveals that the previously-undisclosed friend who accompanied Scalia to the ranch was a prominent Washington lawyer, C. Allen Foster, who is also a high-ranking member of St. Hubertus. Foster, a Republican, has argued voting rights cases before the Supreme Court. It is unclear whether Scalia held membership in the highly-secretive order, although Poindexter denied any knowledge of Scalia belonging to the order.


After Scalia’s death Feb. 13, the names of the 35 other guests at the remote resort, along with details about Scalia’s connection to the hunters, have remained largely unknown. A review of public records shows that some of the men who were with Scalia at the ranch are connected through the International Order of St. Hubertus, whose members gathered at least once before at the same ranch for a celebratory weekend.

Members of the worldwide, male-only society wear dark-green robes emblazoned with a large cross and the motto “Deum Diligite Animalia Diligentes,” which means “Honoring God by honoring His creatures,” according to the group’s website. Some hold titles, such as Grand Master, Prior and Knight Grand Officer. The Order’s name is in honor of Hubert, the patron saint of hunters and fishermen.

Cibolo Creek Ranch owner John Poindexter and C. Allen Foster, a prominent Washington lawyer who traveled to the ranch with Scalia by private plane, hold leadership positions within the Order. It is unclear what, if any, official association Scalia had with the group.

“There is nothing I can add to your observation that among my many guests at Cibolo Creek Ranch over the years some members of the International Order of St. Hubertus have been numbered,” Poindexter said in an email. “I am aware of no connection between that organization and Justice Scalia.”

An attorney for the Scalia family did not respond to requests for comment for this article.

The story couldn't get any creepier. St. Hubertus' American chapter was launched at the infamous Bohemian Club in 1966. The Bohemian Club is an elite all-male club of the nation's most powerful in government and business that meets at Bohemian Grove, a remote wooded area outside of San Francisco, where members frolic in the nude, network and worship a large, carved wooden owl, which former President Richard Nixon railed against on one of his Oval Office recordings as being "the most faggy Goddamn thing you could ever imagine." Many of our recent presidents have attended the club's secret, closed-door summer conclaves.

The Post was able to confirm by showing a copy of a photo of C. Allen Foster to Presidio County Sheriff Danny Dominguez that he was the friend of Scalia who had accompanied him to Cibolo Creek Ranch. Foster flew with Scalia and U.S. Marshals, who provide security to Supreme Court justices, to Houston, where the two boarded a private jet without the U.S. marshals that flew them to a private airport owned by Poindexter. Foster, incidentally, is a former spokesman for the elite big game hunting club, Safari Club International, which includes among its members former President George H.W. Bush, former Vice President Dan Quayle and the late Gen. Norman Schwarzkopf. Evansville businessman Steven Chancellor, a close friend of the Bush family who does contract work for the CIA, is also a member of the elite big game hunting group.

According to The Post, private jets owned by Wallace "Happy" Rogers III and A.J. Lewis III, flew from San Antonio and arrived at the Cibolo Creek Ranch just after noon on February 12 and departed the ranch on February 14 just 30 minutes apart. Rogers owns the Buckhorn Saloon and Museum in San Antonio according to The Post. Lewis owns a restaurant supply company based in San Antonio. Both men are contributors to Republican candidates, unlike Poindexter, who is a major giver to Democratic candidates. Rogers and Lewis have also both held leadership positions in the Texas chapter of St. Hubertus.

Controversy arose shortly after news of Scalia's death became public when it was learned that his body lay in his bed many hours before officials in Presidio County responded to the death scene. Two justices of the peace, whose job it is to conduct death investigations, both turned down requests to go to the ranch, although neither was informed the deceased was Justice Scalia. A county judge and former justice of the peace, Cinderela Guevara, was then contacted, who declared Justice Scalia had died of natural causes over the telephone without visiting the death scene after talking to U.S. marshals and Sheriff Dominguez. No autopsy was performed on Justice Scalia's body, a decision defended by Judge Guevara based on the Scalia family's wishes. Scalia's doctor later released a statement indicating he suffered from heart disease and diabetes, among other health issues, which were attributed to the 79-year old's death.
The speech President John F. Kennedy delivered to newspaper editors railing against the conspiracy of secret societies, which some believe led to his eventual assassination by rogue elements that secretly-control our U.S. government.

And these types of stories in the tabloids come as no surprise. 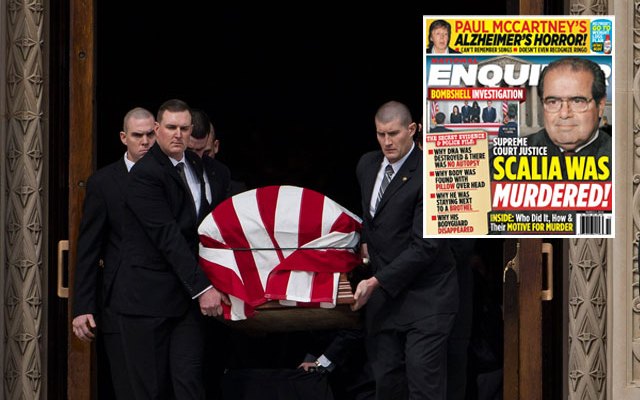 And then there was that time a few years ago when "Family Guy" predicted Scalia's death in a hunting accident.

Explains the occult art crap I saw at Cibolo Creek Ranch
THIS was outside my room there@DRUDGE_REPORT pic.twitter.com/YKkVWxBmNZ
— David Knight (@libertytarian) February 25, 2016

His Majesty, King Juan Carlos of Spain, is Protector of the Order. Royal blood lines in true Illuminati fashion.

That JFK speech was excellent! Thank you Mr. Welsh for bringing it to our attention.

I found a transcript of JFK's speech given April 27th 1961. He mentions:

"And that is why our press was protected by the First Amendment-- the only business in America specifically protected by the Constitution- -not primarily to amuse and entertain, not to emphasize the trivial and the sentimental, not to simply "give the public what it wants"--but to inform, to arouse, to reflect, to state our dangers and our opportunities, to indicate our crises and our choices, to lead, mold, educate and sometimes even anger public opinion".

The McMega-Media of today certainly emphasizes the trivial. More ominous it decides the content and spin, in other words what we will hear, see and read.

Both David Shurter and Fiona Barnett are now writing that they feel very vindicated by this article in the Washington Times, that you blogged about in this post. All can read her report, "Bohemian Grove, Pedo Hunting Parties, and Rent Boy Ranch" posted at PedophilesDownUnder.com. Today, David delves into the accusations that a 13 year old boy slit Scalia's throat to avoid being meanly raped by the Judge, at SavidShurter.com. No autopsy permitted by family or legal authorities, or doctors, eh.