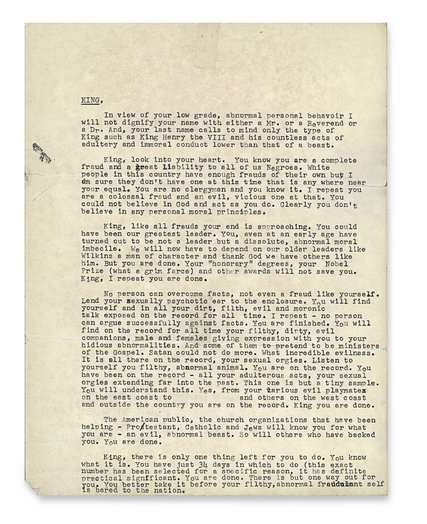 It was once thought of as just crazy conspiracy talk. FBI's J. Edgar Hoover nearly fifty years ago mailed a hate-filled anonymous letter to the late civil rights leader Dr. Martin Luther King, Jr. in a package containing illegally obtained recordings of King's sexual romps with women other than his wife urging him to do the right thing and take his own life. An assistant to FBI Director Hoover typed the one-page letter chocked full of grammatical errors in an effort to make King believe it was a right-wing crackpot determined to destroy him behind the letter rather the nation's top law enforcement agency.

King shared the letter with his closest associates, who agreed with his assessment the letter had come from Hoover's FBI. Ten years later, the Senate's Church Committee confirmed King's suspicions. Gage uncovered the unredacted version of the letter recently while doing research at the National Archives on a biography of Hoover. The recordings made by the FBI began after Hoover ordered illegal surveillance of him and his associates, which included wiretaps in his home, office and hotel rooms. Hoover sought to link King to communists but instead turned up evidence of his infidelity.

According to Gage, Hoover and his associates were surprised by their discovery and began disseminating derogatory information about him to friendly members of the media in hopes of discrediting him. "To their astonishment, the story went nowhere," Gage writes. In 1964, Hoover denounced King as "the most notorious liar in the country." One of Hoover's deputies, William Sullivan, wrote the anonymous letter and had it sent to the FBI's office in Miami for delivery to King in Atlanta. Friendly associates of Hoover maintain Sullivan acted on his own, not at Hoover's direction.

Sullivan died in a freak hunting accident when a hunter supposedly mistook him for a deer and shot him in the neck, killing him instantly. His shooting occurred during a six-month period in 1977 during which a half dozen current and former FBI officers died before they were scheduled to testify before the House Assassinations Committee investigating the FBI's role in the investigation of President Kennedy's assassination.
Posted by Gary R. Welsh at 9:59 PM

You have to wonder how many other people were black mailed or bopught off and then played "ball" with the establishment.

The subject of people being killed has further links when it was decided by the government to kill Castro - Operation Mongoose. Various types of sabotage, were also employed against Cuba.

The Mafia was enlisted to help out as their gambling and other operations were shut down by Castro.

John Roselli and Sam Giancana from the Mafia were tasked with killing Castro in the early 1960's. Roselli testified before the Senate's Church Committee in 1975, shortly after he disappeared. Sam Giancana was killed June 1975 in his home, and Roselli's decomposed body turned up in 55 gallon drum in Florida in August 1976.

It is sad to think how many Americans have given up their lives and been permanently wounded mentally and physically to defend the nation and it's laws. Then we find our government doing what they can subvert these laws.