Tony Kanaan Gets His First Win At Indy

Indianapolis 500 fans were treated to one of the more exciting races in many years, with a record number of 68 lead changes and 14 different drivers taking turns leading today's race. A fan favorite, Tony Kanaan, comes out on top after capturing the lead with just three laps left before a caution light came out and aloud him to coast to victory, his first win at Indy after many years of racing. Rookie Carlos Munoz finished second, ahead of Ryan Hunter-Reay, Marco Andretti and Justin Wilson. Pole sitter Ed Carpenter finished tenth after leading more laps than any other driver at 37. It also turned out to be the fastest in the 97-year history of the race, averaging 187.433 mph. There were also a record number of cars still running at the finish, 27, beating a record 26 that had stood since 1911. 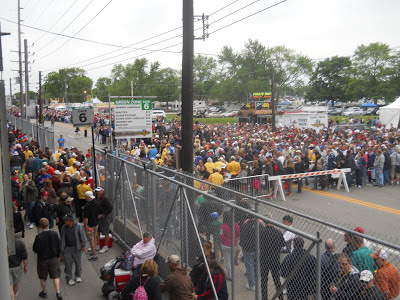 Added security for this year's running of the Indianapolis 500 made for much longer lines and waiting time to enter the track. Knowledge that coolers, backpacks and other carrying items would be subject to security checks didn't seem to deter people from toting what they normally take to the track with them on race day. According to the Star, fans were taking to social media to vent their frustration, some complaining of waits of 45 minutes or more. The 16th Street entrance we took today had only a 10-minute wait. I took the photo above about an hour prior to the start of the race along Georgetown Road to show just how long the lines were. 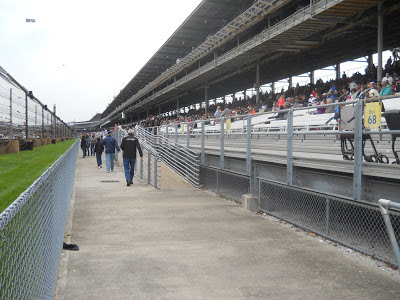 Check out the number of rows of seating that have been eliminated along the straightaway. Also notice all the handicapped seating area that went largely unused.
Posted by Gary R. Welsh at 6:00 PM