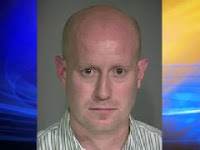 BMV head Andrew Miller literally got caught with his pants down and his thing in hand at a bathroom in Claypool Court. WRTV's Jack Rinehart has the scoop on the 40-year-old married man's unfortunate encounter with an undercover police officer:

The head of the Indiana Bureau of Motor Vehicles has been arrested after soliciting an undercover officer in a restroom downtown.

According to the probable cause affidavit, an Indianapolis police officer conducting an undercover vice investigation said Miller made eye contact with him before looking back at him and walking into the men's restroom.

"Miller stated he was married too, and that it would be OK," according to the probable cause report.

The officer said he then arrested Miller.

It's hard to believe Miller would engage in such conduct in a restroom known to be a target of undercover police for such acts of public indecency. In May, 2006, an undercover police officer arrested a Republican Township Assessor from Evansville for engaging in a similar act in this bathroom. A few years earlier, a New Albany school principal and member of the State Board of Education, got busted in this same bathroom for public indecency. I guess misery loves company.  Miller and his wife live in Carmel with their three children and are active members of St. Maria Goretti Catholic Church in Westfield according to Rinehart. Gov. Mitch Daniels' office was unaware of Miller's arrest when contacted by Rinehart. He reportedly had gone home sick earlier in the day.
Posted by Gary R. Welsh at 9:39 PM

My prayers go out to Andy and his family. I supported Mort Large against Miller when they both ran for the District 86 GOP nomination. It was a bruising campaign, but GOP primaries are supposed to be bruising. Nevertheless, I bear him no ill-will. I hope Andy and his family can deal with this and move on together.

Carlos, I feel sorry for his wife and kids. It's hard to feel sorry for Andy. As the BMV Commissioner, Miller isn't exactly another anonymous face. And to pick a public restroom just a stone's throw from the State House? What was the guy thinking? Doesn't he follow the news? I thought everyone knew that particular bathroom has been plagued by this problem and has been the scene of numerous undercover police arrests. The guy was just begging to be caught.

If it's where I think it is, that was an especially stupid place to get caught because the bathroom stall walls are shorter to deter that type of thing. I think a mall cop down there said this was done because they said homeless guys were going in there and either doing the same thing as Miller or hiding out until the building closed and sleeping there at night.

Whatever, Ogden... I used to work at 30 South Meridian, which adjoins Circle Center and we had an access hallway to get to the mall... I used to walk through the mall and Claypool Court to get to the Embassy Suites next door. Their gift shop was the only place downtown in the winter time where I could get Diet Mountain Dew and not have to go outside. It was like a 10 minute walk, and one time I stopped at a bathroom on the way there and noticed the stalls were shorter.

I don't need to explain this, but I did... mostly that was an a-hole comment and awfully brave to say to a total stranger. Not sure why Gary approved your comment, but whatever. The bathroom is in public view, so anyone would know this, and I haven't worked in that location for 5 years, so my memory is fuzzy on most everything but what I was over in that area for and the fact that I was in there once.

Russ, I didn't think Paul meant for you to take the comment seriously; rather, he made it in jest. Anyone who works downtown knows about the notoriety of this bathroom for anonymous sex hook-ups by mostly married men.

My heart goes out to the guy's family. There are so many men who are controlled by their urges and not by their sense of responsibility to their families and the community. This has got to be the worst day of their lives. I hope his wife has a strong circle of friends and support. I hope she knows it's not her fault. There are some men who just can't seem to overcome it.

I'm surprised no one's yet commented on the religious irony of his circumstance. As a parishioner of St. Maria Goretti's, his church's patroness was martyred for refusing to submit to the demands of a rapist. I'm sure he was no doubt familiar with her story and it's lessons on the potential grave harm gross sexual depravity may cause, and he goes and does this?

I too, Gary, feel for his family, but reverse to your order. His wife got to know him before they began a life together and could choose whether her love for him was worth the risk of any potential emotional harm he might cause to their family at some point. His children, however, had no such chance nor choice. Each of the family are victims here, even if only as the victim of one's own lust, and have my full prayers and empathy.

Man this is the best headline I have read in months. I cannot stop laughing... Obviously, Mitch only hires Brown Nosers. This guy Miller brings a whole new meaning to Brown Noser...

How many long lunches has he taken at the taxpayers expense?

Can we get access to his Key Fob which would show when he was at work and when he was not?

Brizzonator: Give it a shot and fire a public records request to the BMV. Maybe it'll stick? The only question left is: does this mean your a concerned citizen and Hoosier patriot, mere curious voyeur, or outright schadenfreudeist?