Mob Week On AMC: Shades Of Harry Reid In The "Godfather"


It's mob week on AMC. I caught part of the original "Godfather" movies this weekend. Watching this scene in the movie when the character of Nev. Sen. Pat Geary, a Democratic senator from Nevada portrayed by G.D. Spradlin, attempts to shake down Al Pacino's character, Michael Corleone, for a share of his casino revenues while insulting his Italian heritage made me think of Nevada's current senior senator, "Dirty Harry" Reid, who is also the Senate Majority Leader. Corleone makes it clear to Geary that there will be no payments made to him and that he expects Geary to pay the $20,000 license fee for him out of his own pocket. Later in the movie, a dazed Geary awakens in a brothel after blacking out with a dead prostitute lying next to him. When Corleone's mob activities come under scrutiny of a Senate investigative committee later in the movie, Geary becomes his strongest defender on the committee.

Supposedly Geary's character in the movie was loosely based on former Sen. Howard Cannon (D-NV). Cannon was tight with the state's casino owners and good friends with a Nevada brothel owner. The federal government claimed Cannon had agreed to accept valuable Las Vegas real estate from Teamsters union boss, Roy Williams, in the late 1970s in exchange for derailing trucking legislation opposed by the union that went through the Senate Commerce Committee that Cannon chaired at the time. Williams and others were convicted in the bribery scheme, although, oddly, Cannon was never charged with a crime.

Similarly, Sen. Harry Reid's ties to the casino industry have been questioned. He tucked away a kickback provision for the Las Vegas casino industry in the immigration reform bill that went through the Senate earlier this year. Earlier this year, Reid's major campaign contributor was found guilty of making illegal campaign contributions to Reid's campaign committee and, of course, Reid's hands were clean. Four Indian tribes hired by corrupt lobbyist Jack Abramoff began pouring tens of thousands of dollars into Reid's campaign after they hired Abramoff. Reid naturally denied he did anything improper to help Abramoff or his clients. Reid pressured federal regulatory agencies and sponsored legislation to help a business partner who employed his son win approval for a controversial golf course development project. He also obtained federal funding for a Nevada bridge that greatly increased the price of real estate he owned. Reid seemed to morph into Sen. Geary's character when reports surfaced that he had once described Barack Obama as a potentially acceptable black presidential candidate because he was "light skinned" and had "no Negro dialect." There were plenty of laughs all around when Reid appeared in public with a black eye and dislocated shoulder, injuries he says he sustained from a fall while running. 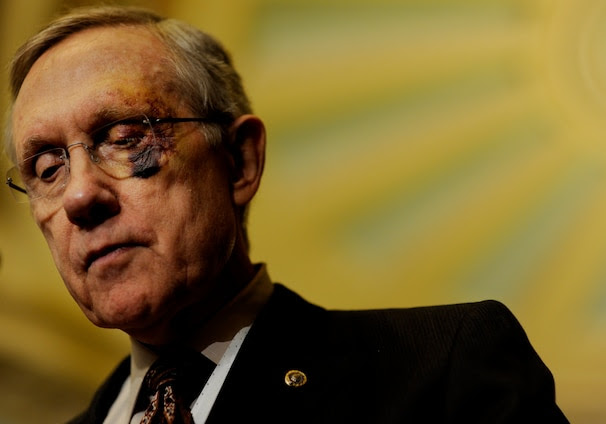 As President Jimmy Carter recently publicly remarked, the US no longer has a working democracy. The mob rules now and Obama is just their puppet.