"Presidential Puppetry": A Must Read 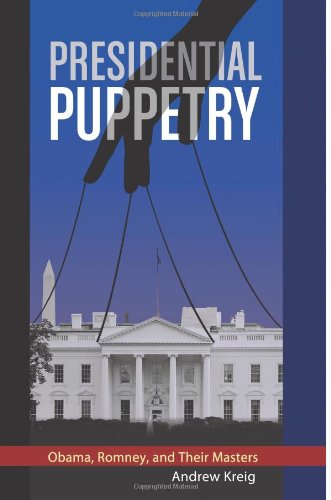 I don't often promote books to my readers, but this one requires your attention. This past week, I've had the opportunity to read a complimentary copy of Andrew Kreig's, "Presidential Puppetry: Obama, Romney and Their Masters." It dovetails perfectly with the cynical conclusions I've drawn about our two-party system in this country often on this blog and how the top leaders of both parties, as well as the big corporate media, simply do the bidding of their puppet masters, the military industrial complex that has assumed virtual control of every major aspect of this country, particularly following the government coup d'etat accomplished in 1963 by the assassination of President John F. Kennedy. The forces that ended his presidency have prospered and dramatically strengthened the iron fist they exercise to the detriment of most Americans who remain silent as rights we believed our constitution guaranteed to all of us as citizens of a democratic republic are eroded by a Nazi-styled government instituted for the benefit of an elite few.

Andrew Kreig's book draws upon his life-time of experiences with our political system as an investigative reporter, attorney, author, business strategist and non-profit executive working in Washington, D.C. Kreig readily acknowledges his past work for powerful companies, along with his work investigating official misconduct through the non-partisan legal reform group, the Justice Integrity Project. He also has a unique perspective as the son of Margaret Kreig, a best-selling author who confessed her role to him as a covert CIA asset when her work took her to China during the early 1970s.

I know that some of you have been dismissive of my past reporting on this blog about the degree to which the CIA and the national security state apparatus has penetrated this country from top to bottom as a bit too conspiratorial but Kreig's book confirms the worst fears. Ideologically, Kreig comes from the opposite end of the political perspective, but his well-researched work leads him to the same conclusion that I have reached about President Barack Obama's puppet strings being pulled by the very same persons who pulled the strings of both Bush presidents and Bill Clinton.

Kreig closely examines Obama's hidden family history and unequivocally concludes that Obama and his other immediate family members, including his mother and grandparents, all had backgrounds working for the CIA long before his name entered the national discussion just like President George H.W. Bush and his son, President George W. Bush. Kreig doesn't overlook the Bush family ties to the financing of the Nazis prior to and during World War II like the mainstream media does. Similarly, Kreig's research picks up on young Bill Clinton work as an intelligence asset dating back to his early college years. Romney's ties to Bain Capital and the Mormon Church also explain his ties to the same puppet masters.

So why didn't the news media discuss the hidden pasts of all of our recent presidents who were performing work covertly for the CIA prior to launching their political careers? Kreig helps explain those puzzling omissions by the mainstream news media, as well as coverage of other public affairs by connecting the dots too many ignore. Yes, their corporate bosses answer to the same people at the end of the day.

Kreig observes three particular omissions  by the media that peaked his curiosity, including the nearly-absent coverage of the post-911 anthrax attacks on members of the media and U.S. Senators, the unusually aggressive prosecution of Jeane Palfrey, the so-called D.C. Madam, and Karl Rove's engineering of the 2007 purge of a number of U.S. Attorneys around the country, and Rove's role in the political prosecution of Alabama's Democratic Gov. Don Siegelman. In case you were curious, Rove's treacherous spying and covert ways are well-documented in Kreig's book.

Kreig's book also offers the stories behind the stories on a number of recent topics of interest, including the resignation of Gen. David Petraeus as CIA Director, Benghazi, plots to commit massive election fraud in 2012 through electronic voting machines, the CIA connection to the Boston Marathon bombing suspects and the latest and newest mysteries revolving around massive federal surveillance of American in the aftermath of whistle blower Edward Snowden's disclosures.

If you like drinking the Kool-Aid that is served up to you by the leaders of the Democratic and Republican Parties, Kreig's book isn't your drink. If you are looking for an insightful, well-researched and critical analysis of the thoroughly corrupt, unethical, vindictive and self-serving elites who have turned our government and nation into something completely unimaginable in the worst nightmares of our Founding Fathers, then Kreig's book will satisfy your thirst for learning more than the half-baked and grossly misleading political analysis and disinformation of the giant corporate media to create the false reality they want us to believe. As Kreig explains in the book's preface, it's for "those who want to understand the news, not just watch it."
Posted by Gary R. Welsh at 9:19 PM

Marine Corp General Smedley Butler who participated in many of our Military Interventions in Central America, the Caribbean, Mexico, China and the Philippines in the early 20th Century had these observations.

"War is a racket. It always has been. It is possibly the oldest, easily the most profitable, surely the most vicious. It is the only one international in scope. It is the only one in which the profits are reckoned in dollars and the losses in lives. A racket is best described, I believe, as something that is not what it seems to the majority of the people. Only a small 'inside' group knows what it is about. It is conducted for the benefit of the very few, at the expense of the very many. Out of war a few people make huge fortunes."

"I spent 33 years and four months in active military service and during that period I spent most of my time as a high class muscle man for Big Business, for Wall Street and the bankers. In short, I was a racketeer, a gangster for capitalism. I helped make Mexico and especially Tampico safe for American oil interests in 1914. I helped make Haiti and Cuba a decent place for the National City Bank boys to collect revenues in. I helped in the raping of half a dozen Central American republics for the benefit of Wall Street. I helped purify Nicaragua for the International Banking House of Brown Brothers in 1902–1912. I brought light to the Dominican Republic for the American sugar interests in 1916. I helped make Honduras right for the American fruit companies in 1903. In China in 1927 I helped see to it that Standard Oil went on its way unmolested. Looking back on it, I might have given Al Capone a few hints. The best he could do was to operate his racket in three districts. I operated on three continents."

General Butler wrote these words before WW 2, the Cold War and now the War on Terror. The Wall Street-Security-Military-Industrial Complex has grown immensely more powerful since then.

Kindle version available for only $2.00. I'm shocked that the Public library does not have a single copy of the book in any format. Shocked!

Thanks for introducing me to this book, Gary. Hell, things have gotten so bad here in the USA, that over the weekend, Matt Drudge has written at his site, that it would be wise to plan an exit strategy.

Corr: Matt Drudge tweeted those four words: "Have an exit plan" over the weekend, and that's not written at his website.