The Gannett-owned Indianapolis Star refused to report on "Deadline: Indianapolis", a book written by one of its former Pulitzer prize-winning reporters, Dick Cady, which shared a life of stories he had experienced while working at the newspaper, many of which made many movers and shakers in Indianapolis extremely uncomfortable. Yet it's more than happy to report on the yarns written in a new book by two certified members of the Omedia about the 2012 presidential race to promote their useless book. Naturally, the Star talks up what a significant player their beloved Mitch Daniels was in the 2012 presidential race in which he never became a candidate according to "Double Down: Game Change 2012" written by Mark Halperin and John Heilemann.

The two Omedia journalists blame an aide for former Utah Gov. Jon Huntsman, Jr. in their book as being behind pushing ugly details about Daniels' divorce and remarriage to his wife, Cheri. The two journalists also blamed Huntsman's father for being behind the story spread by Senate Majority Leader Harry Reid claiming that Mitt Romney had not paid any federal income taxes during a 10-year period. Huntsman says the suggestion that he had anything to do with Romney's tax return issue is totally false and that the book was full of falsehoods and false rumors.

I can't speak to the Huntsman,Sr.-Romney issue, but I'm pretty certain that placing blame on Huntsman's campaign for rumors about Daniels' divorce is laughable. The issue was out there and being looked at by all rivals. Indiana Democrats had already helped gather details of it for potential use by the Obama campaign in the event Daniels became a national candidate. The real story these two Omedia journalists won't report is how the Justice Department was gearing up to prosecute public corruption cases involving his administration that would have likely sank Daniels' political career as a warning to him if he decided to enter the race. Daniels took the strong hint being sent to him and decided to stay out of the race, a move which effectively ended the prosecution of public corruption cases, leaving FBI investigators wondering why they had wasted their time on the investigations.

The books pushes the meme that anyone who mattered in the Republican Party in the minds of these two reporters, the Bushes, Dick Cheney, Chris Christie, Scott Walker et al. were pushing Daniels to get into the race. Flattering comments from former President Bill Clinton are thrown in as well. The book suggests that Daniels gave Romney a "kick in the shins" after he learned that his original list of 12 VP candidates had been cut down to 5 and did not include him. "If I thought the call was coming, I would disconnect the phone," Daniels told Fox News in April of 2012. It should be patently clear that this book was written for the benefit of Barack Obama and Hillary Clinton's 2016 presidential race.

Incidentally, the Gannett employees of the Star took to the streets yesterday to protest negative changes to their health insurance benefits that the company is blaming on Obamacare. Hat tip to Amos Brown, who tweeted and posted images of the protest on his Twitter account. 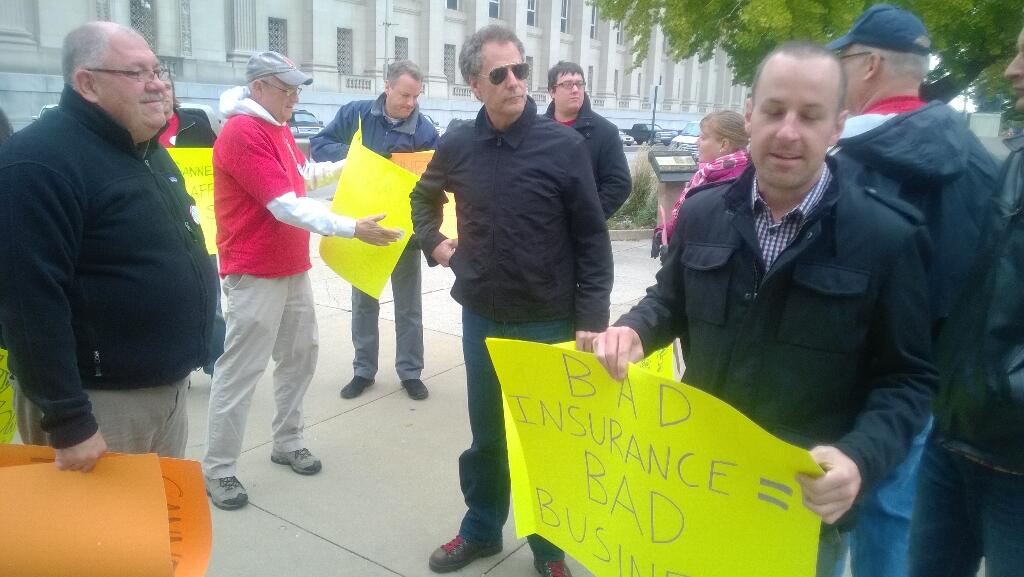 Do you have any proof that the Justice Department was gearing up to go after Daniels cronies? And if so do you know which ones? I thought the FBI in this state was corrupt but who is more so the FBI or the US Attorney's office? Also why has their been no federal investigation of FSSA, DWD, IURC?

You need to get the task force that's supposedly been investigating those matters for the past few years to explain their inaction on those matters. It's not been for a lack of evidence falling into their laps. I have my opinions. Until they produce proof to convince me otherwise, I will assume the worst of their abysmal failure to root out widespread corruption in state and local government.

I swear to God what will it take to get the feds to do their damn job and go after the Daniels gang!