Democrats nationally and in the Blue Grass State have their eyes set on defeating Senate Republican Leader Mitch McConnell, who is expected to seek re-election next year. Apparently their best hope of defeating McConnell is Ashley Judd, the washed up actress and former spouse of IndyCar driver Dario Franchitti. The couple recently announced their divorce as Judd geared up to run for the Senate in Kentucky. Judd hasn't lived in Kentucky for more than 20 years. She moved to neighboring Tennessee in 1993 after her Malibu, California home burned down. In 2012, she represented Tennessee as a delegate to the Democratic National Convention in Charlotte.

Two Democratic liberal activists from Louisville drew the ire of McConnell when they erroneously claimed in racially-charged comments that his wife, Elaine Chao, is from China. The Progress Kentucky activists suggested in a Twitter post that because Chao as his wife has McConnell's ear, it "may explain why your job moved to China." Chao is actually a native of Taiwan, whose family brought her to America when she was eight year old. "Elaine Chao is just as much an American as any of the rest of them," McConnell said. "In fact, she had to go through a lot more to become an American," McConnell said in response to the slurs made against his wife. Chao served as Labor Secretary in the cabinet of former President George W. Bush.

Progress Kentucky, an Internet site committed to the defeat of McConnell, deleted the offensive Twitter comments and issued an apology. "Those tweets did not reflect our values, and we are committed to making sure nothing like that happens again," the website said in a post published on March 1. "We also apologize to our many supporters, and all Kentuckians working for change in 2014, for those communications. Comments with references to race, ethnicity or sexual orientation have no place in any debate, and we are deeply embarrassed by such a mistake."

Meanwhile, the Daily Caller takes note of the left-leaning Politico's take on a recent speech delivered by potential McConnell foe, Ashley Judd, at George Washington University on women's health this past week. During her speech, Judd said her dog was on a hunger strike, she was sending "eye kisses" to her mother and claimed the University of Kentucky had the nation's oldest student-run daily newspaper in the country before telling her audience she might be "making that up." Politico initially ran with a headline on its website Friday evening that called her speech both "bizarre" and "poignant." By the next day, Politico edited its headline to read “Ashley Judd gives poignant talk at D.C. forum.” 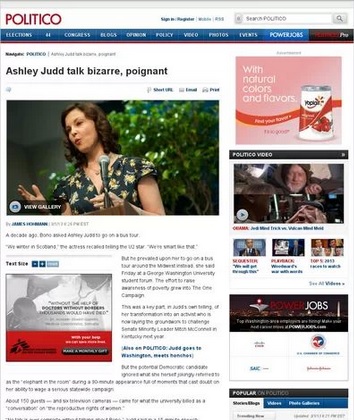 How many of the current US senators actually live in their respective states? (and no I am not defending this at all).

I am wondering how long it is going to take voters to insist that their congressmen and senators actually represent their states. 5 years, twenty year, ever?

McConnell along with Pelosi, Reid and Boehner need to go, a gang of four. Not that think Ashley Judd has the slightest qualifications for the Senate.

This gang of four has been around too long and have demonstrated no leadership. They simply represent factions that hope to feed off of the Government.

It is sad to see so many Americans just trying to just stay even and this Gang Four sits with supreme indifference, like the Royalty of Medieval Europe.