Star Turning Up Heat On Brizzi 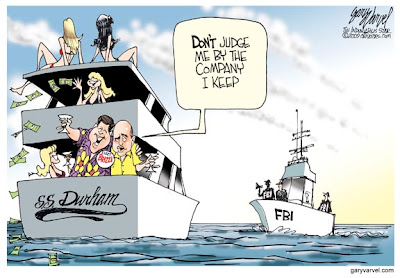 An editorial in the Sunday edition of the Star pressures Marion Co. Prosecutor Carl Brizzi to open up about his financial ties to Tim Durham. As a high-ranking member of our criminal justice system, the editorial says "Brizzi is obligated to be as transparent as possible about his close relationship with financier Tim Durham." "Brizzi has so far failed to meet that obligation," the editorial complains. "Brizzi's ties to Durham stretch well beyond the spheres of politics and business . . . Brizzi, at the least, is guilty of extraordinarily bad judgment in forging close personal ties with an individual who federal authorities say was operating a Ponzi scheme."

The editorial notes that media questions about Brizzi's relationship with Durham have been raised in the past two years to no avail. "Brizzi needs to clearly detail the extent of that friendship," the editorial opines. "Instead, the prosecutor, once eager to court the media, has canceled interviews and declined to answer questions about his investments . . . It's time for the prosecutor to start talking." There is a cartoon by Gary Varvel that accompanies the editorial with the caption "Don't judge me by the company I keep" that is hilarious. I'll add it to this post if it appears online. Meanwhile, reporters are sifting through Brizzi's divorce records, campaign finance records and economic interest statements to find the answers Brizzi won't share with them.

There's also more bad news for Durham's Fair Finance. The Akron Better Business Bureau, which used to give an A rating to Fair Finance, has recently lowered its rating to F. According to the organization's website, the F rating for Fair Finance is the result of the "number of complaints filed against business" and "failure to obtain a required competency license". "These complaints primarily concern disputes regarding the financing of health club memberships across the country," the website reads.
Posted by Gary R. Welsh at 12:15 PM

Brizzi and Durham will not fare well with this.

The court of public opinion is going to eat those two (and the Marion County GOP) alive.

Good for the Star. Why they're preoccupied with protecting the taxpayer, why not look at the Wishard funding scam, IPS administrative staffing, or conflicts of interest from members of the City Council or the CIB? If a paper's on shakey ground economically, why not try protecting those that actually still buy the thing with real journalism?

Mel, I hope you don't take this wrong, please don't.
Have you ever done business with the Amish?
Some are very honest, some will steal your gold teeth if given a chance.
Being Amish isn't a free pass to heaven for being straight forward and holy.
I've had business dealing with Amish men who could out drink me...and I can drink a lot of beer if I put my mind to it.
I know Amish men who do odd jobs and they aren't shy about overcharging for the work.
The Amish in Indiana and Ohio run most of the puppy mills, if you have ever seen a puppy mill then you understand where I'm coming from.
The Amish have the honest hard working folks also being Amish isn't ant different than being Baptist both have their good and bad.

The puppy mill reference made me look it up. Sounds true to some extent, some Amish involvement. Hopefully some of those people are the victims here...

Iowa is maybe 3rd in the nation for puppy mills.

Mr. Brizzi should answer these serious allegations or resign. I have spoken with someone who is a PI and he mentioned that he heard that there are several private investigators who are investigating Brizzi, Durham, Tom Johns, and a others and that there will be information leaked to the blogs here soon to the extent of the fraud and corruption in our city. I am thankful that this person kept his information general for I do not wish to know too much at this moment, but offered the web addresses to these blogs and contact numbers if/when they are ready to release this bombshell.

Funny how the bloggers have already tried and convicted Brizzi, especially Melissa. When did she become judge, jury and hangman?

I'm withholding judgment until after the dust settles. Enough of the conjecture. Durham has undoubtedly been up to some funny business, but to project that to Brizzi at this point, is akin to calling him a Salem Witch.

Seems to me that I was told Tom John's newest bride has a P.I. background.

The puppy mill thing is true. And I never said anything about the morality or even the immorality of the Amish.

I did assert that you don't defraud them and expect it to end well.

When the look the other way's and cover ups start slinking out into the public eye the shame laid at the feet of Mr. Brizzi, his local friends and politicians and at the State level will be felt for decades.

All the way to the top knows what each other has been doing for years. I am amazed the Governor has the guts to state he doesn't know what Brizzi's business or business partners are when Mr. Durham sat on his own re-election committee.

If his team did not vet Mr. Durham and find out his business dealings before taking his money and then let him steer the committee that HANDLED ALL THE RE-ELECTION money than he must be a very poor administrator where he is now or he isn't quite coming clean either. As he so eloquently stated to Jim Shella he will let the citizens decide if anything was done wrong.

Let the decisions begin in that arena as well as calling out Mr. Brizzi. If Durham gave money and steered money in the Governors race the Governor too should come clean!

Melyssa is simply one of the many who collectively will make up his jury, whether that is in an actual court room, or simply should he ever venture to put his name up for election again. She became a member of that jury when Brizzi ran for election. Like many others, apparently she's seen enough to make her call. You haven't. Yet.

Maybe part of Melyssa's appraisal is that Brizzi is acting like a guilty man. He is surely aware of the public questions of his own finances and connections. An innocent man, in the cross-fire of public condemnation and accusation, eager for public office as you surely will concede, will show the public his innocence.

Brizzi is doing anything but that. He is classically stone-walling. The star editorial's comments that Brizzi is usually not particularly camera-shy has great meaning in this context where he is making himself unusually unavailable. He is acting like someone has advised him to invoke his 5th amendment rights. That's usually what they criminal defense attorneys do with their clients.

Brizzi could resolve this now, could humiliate and humble his growing list of detractors by showing his lack of involvement in Durham-Gate. He doesn't have to wait for the dust to settle, and the voting public should not have to either from the elected prosecutor of the 13th largest metropolitan area in the country. He isn't, probably because he cannot.

Regardless of whether Brizzi is in trouble for the Durham connection, the fact is our prosecutor for 7 years has looked the other way while white collar crime and political corruptioin ran rampant in this city.