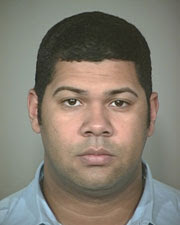 According to IMPD, an assistant manager at a Fifth Third Bank branch on Georgetown Road in Indianapolis had been removing cash belonging to the bank from its vault for a period of time. After sending other bank employees home, Dwayne Roberts allegedly set cash inside the vault on fire in order to cover up evidence of missing money. In his rush to close the vault, Roberts dropped his car keys inside the vault, locking them inside with no way to lock the bank's doors or drive away in his car. With a fire burning inside the vault, Roberts had no other choice than to call 911. Because Roberts was the only employee with keys to the vault, police immediately turned their attention to him. Surveillance tapes confirmed police suspicions. WTHR quotes IMPD spokesman Matt Mount, "It showed an individual that was later identified as Mr. Roberts going in and out of this vault. And after he's leaving the flames starting to come up," Mount explained. Police later recovered $6,000 in cash from Roberts' car. He is facing felony theft and arson charges. I'm sure those surveillance tapes will wind up sooner or later on that show that shows stupid criminals caught on tape.
Posted by Gary R. Welsh at 5:08 PM