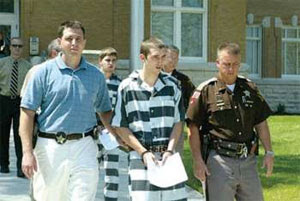 One of the men charged with the hate crime killing of Aaron Hall, Coleman King, had originally requested an early trial date of June 21, barely 60 days after his arrest for the gruesome crime. Jackson Circuit Court Judge Bill Vance has granted a continuance for King's trial until December 18. Judge Vance also turned down a bail request by King's attorney according to a court employee.
Hall allegedly touched King in the groin area and requested oral sex from him according to a probable cause affidavit before King and another man, Garrett Gray, allegedly beat Hall over a several hour period, stripped him naked, dumped him in a ditch along a secluded farm lane and left him for dead. Garrett Gray is awaiting a trial date currently set for October 16.
King is shown in the photo above taken by the Seymour Tribune's Aubrey Woods being escorted from court by sheriff's deputies.
Posted by Gary R. Welsh at 8:23 AM

As this news barely reached Chicago today, the Center on Halsted Anti-Violence Project would like to extend to this network our community outreach services in response to this heinous hate crime. We have read the article written by Steven Higgs at the Bloomington Alternative. There was no mention in the article about Mr. Hall having any surviving friends or family. At the Anti-Violence Project (AVP) we offer critical incident crisis counseling and education around hate violence for survivors of anti-LGBT violence. The town where the murder occured may or may not have folk wanting to gather for a forum or townhall meeting. Please, if there is talk of a community support and awareness event, feel free to contact the Chicago AVP with any questions or concerns.

Thanks Gary for keeping us informed on this story. It needs to make national news. It is an important one. And thanks to Laura Velazquez for her help with support. Hopefully she's linking it with people all over the country.

It needs widespread attention that's for sure. The good ole boys in the system want this to die. That will take the focus off of the fact that the body lay in the deputy coroner's garage for 10 days before being discovered.

Gary,
I read the Higgs article after hearing about the case on Towleroad. This is doubly ugly because the MSM appears to be ignoring it.

Thanks for not letting this go un-noticed.

Is there any pressure point that people outside of Indiana can push to get some attention paid to this?

Thanks for writing. One of the TV stations here in Indianapolis, WTHR, covered the story initially, which included an interview of Thomas Hall, Aaron's brother. The excuse I've been given by the Indianapolis Star is that it's not in their circulation territory. That didn't keep them from covering the kidnapping, rape and murder of a young girl in the same town two years ago. I think if a major MSM newspaper outside of Indiana, such as the NY Times, LA Times, or Chicago Tribune covered it, it would really shake things up. My neighbor is in charge of the Star's south bureau, which would technically get the story. She personally would like to see the newspaper cover it, but she's been unsuccessful in her efforts. The national activity in the blogospere just began to take off this past week, although I've been writing about it since late April. I see that your last name is Hall. Is that just a coincidence.