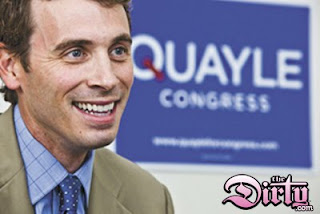 Former Vice President Dan Quayles' younger son, Ben, is seeking an open congressional seat in Arizona and is considered the favorite candidate to win the seat currently held by U.S. Rep. John Shadegg (R). The Politico website has unearthed a bit of dirt on his alleged role as a regular contributor to Dirty Scottsdale, a local gossip blog. Hooman Karamian, the site's founder, who uses the alias Nic Richie, claims Ben also blogged at the gossip site under the alias Brock Landers three years ago. Quayle told the Politico that he had no role in the founding of the site. When pressed on the question of whether he contributed posts to the site, Ben dodged answering the question. "I was not involved in the site," he said.

Richie claims Quayle wrote under the alias “Brock” and contributed a regular feature on the blog, which discussed the club scene in Scottsdale and the women who frequent them, in its first few months of existence known as “Brock’s Chick.” Ben allegedly documented his quest to find the “hottest chick in Scottsdale.”  Ben allegedly wrote eight to 10 blog posts on the site over three to four months according to Richie.

Quayle does admit to Politico that he knows Richie, telling the political site he thinks he met him through Richie's ex-wife. Quayle also admits to helping Richie find an intellectual property lawyer for the site at the law firm where he worked, Snell & Wilmer. “My only involvement in its creation was to recommend an intellectual property lawyer to its founder,” Quayle said. The blog has since grown considerably and has gone international under the business name, Daily World, LLC, which publishes the site, TheDirty.com. Richie claims Quayle cut his ties to the site after a few months because of his political aspirations. Quayle claims he had not thought about running for Congress until his recent entry into his congressional race.

A recent post on TheDirty.com criticizes Quayle for disowning his former friends.  "Nik, the guy is acting like he never knew you," one post complaints. "Talk about a terrible friend considering you guys were part of Jeremy Roenick’s crew and I would see both your drunk asses at 33 in North Scottsdale." The site makes it easy to access some of Brock's former posts in case you're as interested as I was in perusing them. In one post, Brock dishes dirt in a post entitled, Lost In Translation," about how women tend to inaccurately describe the friend with whom they are trying to set you up on a date:


This post poses a question for the ladies. Why do you grossly exaggerate the foxiness level of your friends when you are attempting to set them up with a fella? It’s as if all ladies suddenly become the most brilliant marketers on the planet when they are describing their friends. You’re like F’n QVC. Do I need a food dehydrator? Probably not, but you make it sound so damn appealing.

To be completely honest, I have fallen victim to this ruse. I know, I know, I’m as shocked as you are. Usually I decline any set up because the thought of going out on a date makes me itchy. But, every once in awhile, I’ll take a flyer and agree to a night filled with awkward pauses. What can I say?…I like to mix it up a bit.

Brock's advice to friends: "Fellas, the next time a lady describes her friend using the terms on the left, simply substitute said term with the descriptive adjective (or phrase) on the left." He then lists a number of adjectives to describe potential female dates and how they should be translated. For example, "pretty" really means "plain." "Nice face" means "bad body." And "good personality" means "morbidly obese/drug addict."

In one post, Brock complained that he had received zero pictures from readers who he asked to submit their ideal "foxy lady." "I received a whopping zero pictures," he laments. "Jesus…I almost feel like the kid who eats paste in elementary school…almost." Commenting on a woman whose picture can be found all over the Internet he writes, "Obviously this girl friggin loves to be photographed–it’s like crack to her." "In fact, I’m fairly certain that she purposefully runs red lights so she can get her picture taken by the red light cameras."

Brock imagines himself for a moment with the ideal "foxy lady". He then concludes it just wouldn't work. "The Arizona legislature recently passed a bill that forbids me and this young lady from being an item because we’re too good looking," he satirically writes. "The debate surrounding this bill was very heated because our classic good looks are polarizing, but I understand they’re line of thinking." "If we were to be seen together, our level of attractiveness would be a combined 142–and that’s on a scale of 1-to-5."  "There is a distinct possibility that persons in the general public would keel over and die from being inundated with such a high level of concentrated beauty." "So, for the good of the public health, it is probably better if this lovely lady and I stay apart."

In another post, Brock comments on the fascination readers of the blog have with the blogger P-Nazi. Giving a clue to his age, he draws an analogy to the old teen show, Saved By The Bell.


It’s similar to how Jessie Spano used to bad mouth A.C. Slater when she was actually totally pining for his deltoids, mullet and winning smile. After some self-reflection, Jessie finally admitted to the love that had been there all along. DS readers, you need to put down the caffeine pills and just take P-Nazi to the prom. Otherwise, your spiraling descent into caffeine pill addiction will end with you singing “I’m so excited” while uncontrollably weeping. This is yet another example of how the lessons we learned from “Saved by the Bell” continue to shape our lives.

Brock expresses his disdain for tattoos in another post. "Seriously, does everyone in this town have an F’n tattoo?" he asks. "Does the Scottsdale city council have a task force that delves out crappy tattoos to all of its citizens?" "If a lady tells you she has a tattoo but only a lucky few get to see it, the tattoo in question is undoubtedly a butterfly," Brock opines. "Plus, the 'lucky few' actually means 9 out of 10 bartenders in Old Town. It’s kind of like the number of dentists who recommend Trident…only different." And he doesn't like Frat-related tattoos:

Hey! Francis Frat Rat! I don’t care if your frat was the coolest frat at Chico State, nothing screams ‘douche’ like a 35 year old dude with frat letters emblazoned on his body. Guy, you graduated college over ten years ago. Having this tattoo does not mean a comely ASU co-ed will go home with you. One more thing, put your collar down. I know the saying, “Collars pop, panties drop,” but you’re middle aged–so cut it out.

It's not exactly the kind of writing for which his great grandfather, Eugene C. Pulliam, the famous newspaper publisher of the Indianapolis Star-News became known as a stalwart of conservative thought in this country. Perhaps I can understand Ben's desire to distance himself from his stint as Brock Landers at Dirty Scottsdale. I never really heard much about Ben prior to his announcement this year that he would run for Congress. His older brother, Tucker, shown at left with Ben and sister Corine in a picture taken during the 1980s, is the son most Hoosier political types discussed. He was once touted as a potential candidate for office here in Indiana before he went bald and no longer looked as attractive as he once did. I do remember a former Quayle Senate staffer telling me about how a young Ben was a bit of drama queen and quite particular about the clothes people wore. The former staffer mentioned one occasion when a rather young Ben commented to one of Quayle's staffers that the shirt he was wearing was a fake Ralph Lauren polo shirt. The staffer was taken aback by the biting fashion comment of the young lad.

Last week, Quayle was forced to fend off charges that he was using a "rent-a-family" in a direct mailer he spent to voters in his congressional district. The accusation was leveled by one of his GOP opponents, Vernon Parker. It turns out the two young girls in a photo with Ben were his nieces. Quayle has suggested Parker ripped off taxpayers with millions in contracts he received from the federal government as a minority contractor. "He collected a lot of taxpayer money for doing little or no work, before being found by the Small Business Administration to have lied in his effort to gain the contracts and investigated," Quayle said of Parker in a recent press release.
Posted by Gary R. Welsh at 4:57 PM

Oh my gosh! What's next from the Quayles.

The apple doesn't fall far from the tree!!

BQ denied creating the post, that is a fact I was able to research. This story is a sick attempt at weak journalists trying to have their 5 minutes. The comments the source for this story were from Kasie & Scott and they are just your run of the mill tabloid journalists trying to make it on a political website. To take a non issue and blow it up is typical media entertainment that is taking away from what we deserve in AZ, that is the truth.