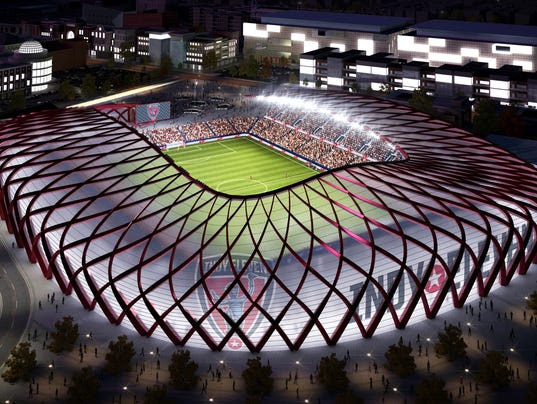 The Indiana General Assembly is too often nothing more than a public auction where prostitutes masquerading as lawmakers hang out their shingles, making it a perfect place for a shadowy Turkish immigrant businessman to swoop in with high-paid lobbyists to pass legislation allowing him to capture nearly $100 million of your state tax dollars to build a new, multi-purpose soccer stadium for his Indy Eleven minor league soccer team with only one season under its belt, which he will get to use exclusively for his own profit-making purposes, while taxpayers are stuck footing the bill for the expense of maintaining it just like the billionaire NFL and NBA team owners whose teams play in Lucas Oil Stadium and Banker's Life Fieldhouse on our dime.

Indiana lawmakers have no idea what Ersal Ozdemir's background back in Turkey was or just where the hell all of the money is coming from to finance his ambitious endeavors as he tosses big money around everywhere he goes. What we know is that a little more than a decade ago he was broke and facing a number of lawsuits for unpaid bills and now he's touted as having deep pockets. The man claims he was mentored by convicted Ponzi schemer Tim Durham's mentor, the late Beurt SerVaas,  a high-ranking OSS officer during World War II and long-time President of the Indianapolis City-County Council who flipped businesses for a living while working covertly as an agent of the Central Intelligence Agency. Ozdemir's meteoric rise in Indiana business and politics closely parallels that of Syrian immigrant Tony Rezko, who started making the Chicago political and business scene as a civil engineer/real estate developer big time in the 1990s and spreading hundreds of millions of dollars around we were told by the late political columnist Robert Novak he got from a corrupt Iraqi billionaire businessman.

Rezko is now sitting in a federal prison after being convicted of multiple public corruption charges, but not before taking down Illinois Gov. Rod Blagojevich with him and playing a key role in the meteoric political rise of Barack Obama, who was able to buy his mansion on Chicago's south side with the financial assistance of Rezko. We can't help but wonder if Ozdemir has a secret billionaire benefactor in the Middle East with close ties to the CIA just like Rezko. The American people are clueless about the magnitude of the money earned off-the-books by the CIA, which it gets from its heroin and cocaine smuggling operations and illegal arm sales that are laundered through various businesses operated by its intelligence assets, and which makes its way into this country where it is used to subvert the political system for the benefit of a ruling elite that are hell-bent on establishing a fascist dictatorship greater than Hitler's Third Reich.

State Rep. Todd Huston, a Republican lawmaker from Fishers, is sponsoring HB 1273, which would allow the Marion Co. Professional Sports Development Area ("PSDA") to be expanded to capture some unnamed site in downtown Indianapolis far from Huston's suburban Hamilton County district for Ozdemir's envisioned $83 million, 18,500-seat soccer stadium that would be built for multi-purposes, including outdoor concerts, lacrosse, football and other special events, in addition to serving as the home playing venue for his newly-minted Indy Eleven minor league soccer team. HB 1273 would make the Capital Improvement Board responsible for owning and maintaining the publicly-financed stadium. The CIB would be allowed to capture an additional $5 million annually in income and sales taxes generated from within the PSDA and admissions taxes collected on the sale of tickets to events at the stadium. The PSDA is already capturing over $14 million a year in income and sales taxes. Contrary to the claims of the Indy Eleven public relations folks, the capture of these tax dollars takes away money that would otherwise be available to fund state and local services.

Rep. Huston is not sponsoring HB 1273 alone. He has other Marion County legislators who have signed on as co-sponsors, including Reps. Justin Moed (D) and Cindy Kirchhofter (R). Rep. David Ober (R-Albion), who has obviously taken a quicker path than many to the corrupt ways of Indiana State House politics, is doing Ozdemir's bidding as well. Rep. Tim Brown (R-Crawfordsville), the chairman of the House Ways & Means Committee says he wants Ozdemir to have some skin in the game. Last year, he allowed the legislation to sail through his committee and the full House with very little public discussion before it was killed in the Senate. We know what counts as skin in the game. Ozdemir gets to sell the naming rights for an arena built with our taxpayer dollars and claim those revenues as his contribution to the arena's cost.

The fiscal analysis prepared by LSA's Heath Holloway is highly suspect. He relies on data from the NFL, NBA and Minor League Baseball as if those are remotely comparable to this fledgling minor league soccer franchise, as well as data he got from Indy Elven. Despite lies contained in press releases from Indy Eleven repeated as fact by our useless local media, Indy Eleven DID NOT SELL OUT EVERY HOME GAME LAST SEASON. Force the liars to reveal how many free tickets they were giving away to every game, and show us the images of the gaping holes at many of the team's home games at the more than adequate Carroll Stadium, not to mention the large sections of seating blocked off by banners at every game.

While an 18,500-seat arena is being built, the fiscal analysis assumes a stadium with a capacity of 12,000, or about 1,500 more than Indy Eleven falsely claims attended each home game last year. Holloway's analysis claims a 10% admission tax could generate up to $519,000 annually, which would assume over $5 million annually in ticket sales. It's interesting that the fiscal analysis for this stadium funding legislation assumes that it will generate nearly the exact $5 million the Indianapolis Motor Speedway was estimated to generate to pay debt service on the $100 million the state is issuing in bonds to finance improvements for the privately-owned race track and related facilities.

The only thing we know for certain is that there will be no critical analysis by the media in this state of the latest public heist for the benefit of yet another sports endeavor. When it comes to promoting anything related to sports, they're only capable of putting out press releases for the sports team owners and their rent-a-civic leader friends. Indiana lawmakers only care about helping people who are stuffing money in their campaign pockets, and Ersal Ozdemir has learned that trade quite well in the short time he's been a U.S. citizen just like Tony Rezko learned too well before his friends in high places threw him under the bus.

Please read my previous post on the soccer stadium deal that Indy Eleven's Peter Wilt helped put together for the Chicago Fire, which has left taxpayers in Cook County's Bridgeview community reeling after it never came close to living up to expectations. It's the story the Indianapolis media doesn't want the public here to know about.
Gary R. Welsh at 9:38 PM
Share