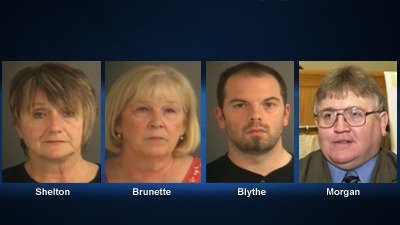 Without those forged signatures, Barack Obama would not have had a sufficient number of valid petition ballots to have made the Indiana ballot in 2008, one of the closest and hardest fought state contests between Obama and Hillary Clinton on the road to his narrow national Democratic nomination win. Today, the South Bend Tribune reports that four St. Joseph County Democratic operatives, including former party chairman Butch Morgan, were indicted for their role in forging presidential ballot petitions. The other persons indicted along with Morgan were all employees of the county's voter registration office.


Butch Morgan, former head of the Democratic Party, and Pam Brunette, Bev Shelton, and Dustin Blythe, all current or former voter registration workers, have been charged in the case, as follows:

Blythe: Nine counts of forgery and one count of falsely making a petition of nomination.

Shelton: Nine counts of forgery and one count of falsely making a petition of nomination.

The investigation remains ongoing by Indiana State Police. Anyone with information is asked to call Detective Michael Robinson at 574-206-2931.

The Tribune, in a joint investigation with Howey Politics, uncovered the petition-forging scandal last year. Despite their excellent investigative reporting, the story was met with a collective yawn by the Omedia, which has basically pretended the story never happened. The Gannett-owned Indianapolis Star has not had a single story on it to date, continuing its precipitous decline into oblivion as a newspaper of relevance. For those tempted to dismiss this as partisan politics, the prosecutor who brought today's charges, Michael Dvorak, is a Democrat. His signature was among those forged on the ballot petitions. Read the indictment and probable cause affidavit against Morgan by clicking here.

The Indiana Democratic Party's Culture of Corruption is not immune to the law. Today's indictment of four individuals in St. Joseph County, including the former Democrat Party county chairman, is yet another reminder that Democrats in Indiana will do anything just to win an election.

From North Vernon to South Bend, Lake County to Muncie, Democrats are being exposed and held accountable. Hoosiers have seen the pattern of corruption and these illegal acts will no longer be tolerated.

To those across the country standing in the way of reforms that will preserve the integrity of our elections process, you need not look further than South Bend to know that election and voter fraud is real."

Despite the significant impact the forged ballot petitions played in Indiana's hotly-contested Democratic presidential primary race and, by extension, the 2008 presidential race, the Indiana and national media will continue to ignore this story. The forgery element plays right into the argument that Obama's entire presidential candidacy was based largely on a fictional biographical narrative. Experts hired to investigate Obama have determined beyond a doubt that his birth certificate and selective service records were forged, and that he stole a social security number previously issued to a dead person. Obama's meteoric political rise and ascension to the White House represents the biggest fraud in American political history. While news organizations throughout the world report on the questionable Obama biographical narrative, major media organizations in the United States have ordered a complete news blackout on coverage of any matters questioning his origins that might serve to undermine his legitimacy. Prominent persons who have spoken publicly on the issue have been blacklisted by the state-run American news media.

Don't miss this video below where a successful Hollywood producer and former supporter of Hillary Clinton recounts to Dr. Jerome Corsi how she heard Bill Clinton flatly state his belief that Obama was not eligible to be president. Bettina Viviano makes it clear that the original birthers were Bill and Hillary Clinton. It's funny how people like the Clintons are willing to compromise principle for political viability. The Clintons have obviously been rewarded quite handsomely for agreeing to go along with the Obama fraud.